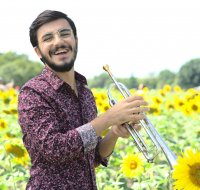 Ahmad Baset Azizi is a junior at the University of Kansas, pursuing bachelor’s degrees in Political Science, Global & International Studies, and Music with minors in Intelligence and National Security Studies and Middle East Studies. He is originally from Afghanistan. During sixteen years in Kabul and his music career, he has performed for both President Hamid Karzai and President Ashraf Ghani on multiple occasions. He has performed for ministers, government officials, and diplomats in multiple embassies such as the Embassies of the United States, United Kingdom, Germany, Australia, France, Denmark, and Sweden in Kabul. He received the Musical Ambassador Award from the 10th Mountain Division Band. He is interested in working in the government and becoming an ambassador. He likes traveling, meeting new friends, eating a variety of food, and learning about other cultures. His mission is to educate people to accept each other with all our beautiful differences.