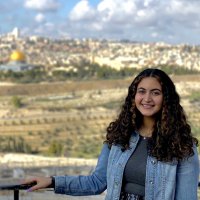 Sura Jaradat is a junior at the University of Kansas, pursuing a bachelor’s degree in Global & International Studies with minors in Intelligence and National Security Studies, Middle East Studies, and East Asian Languages and Cultures. Growing up between two different cultures, as a Jordanian American, influenced Sura to learn more about other languages and cultures. She did this by participating in a gap year abroad in South Korea before beginning college through a State Department funded program called NSLI-Y. Her time abroad in Jordan and South Korea was heavily impacted by her volunteer service with both North Korean and Syrian refugees. The combination of these experiences have inspired Sura to gain a deeper understanding of the global security environment and the negative effects it creates on social services for the people caught in the crossfire of conflict. She hopes to achieve her goals by eventually pursuing a graduate degree in Public Policy or International Affairs before beginning her career. In her free time, Sura enjoys trying new foods from other cultures, cycling, and baking for her family and friends.